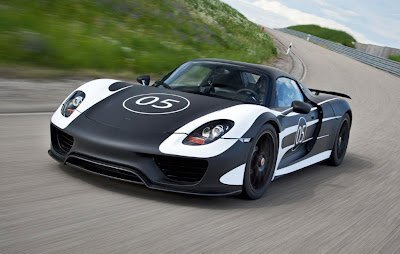 In its present form, Porsche’s upcoming hybrid supercar, the 918 Spyder, looks more like something out of Doc Brown’s imagination than the flashy concept that stunned the crowds at the 2010 Geneva auto show. Its body, such as it is, consists of a collection of  ill-fitting chopped-up 911 pieces bolted to a carbon-fiber tub bristling with snorkels, fat bundles of wires, and what appears to be a Zero Halliburton aluminum suitcase. We’re at the Nardo high-speed test track in southern Italy to get a taste of this rolling science project. As we enter the mule through a flat-black 911 door, we see the ignition key to the left of the steering wheel, just as in nearly every other Porsche. This is about the only thing familiar about the 918 Spyder.

The rear electric motor kicks in without interruption as the front motor gets decoupled and goes asleep. The rear electric motor powers the now rear-drive two-seater up to 93 mph. In electric mode, acceleration is sufficient but not breathtaking. According to project leader Frank Walliser, the 918’s electric range is 16 miles. It seemed easy to maintain this mode as long as the throttle wasn’t depressed to the kickdown point. At that point, the V-8 fired, adding its considerable thrust to the electric motor’s torque. The transition from e-mode to combustion mode is amazingly smooth, especially for a vehicle with more than a year of additional development work remaining. 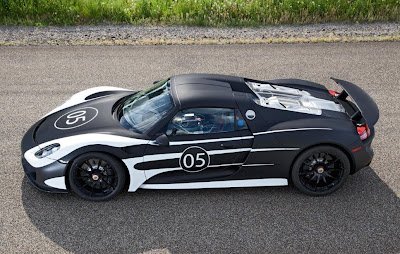 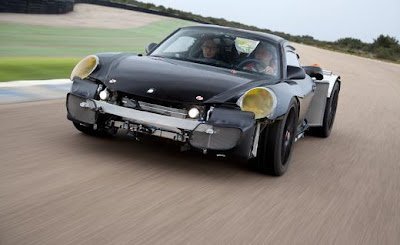 Both electric motors are powered by a 6.8-kWh, liquid-cooled lithium-ion battery pack mounted between the seats and the V-8. Because the 918 Spyder is a plug-in hybrid, the batteries can be charged with 240-volt household electricity in about four hours or with a higher voltage system in a couple of hours. An AC-to-DC converter located near the battery pack is fed by a power socket built into the passenger’s-side B-pillar. 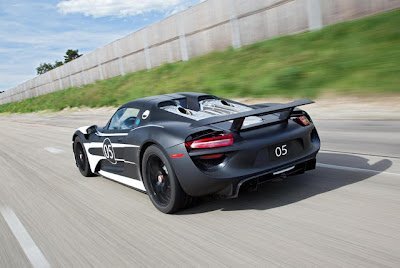 Predictably, the 918 Spyder will use regenerative braking to stretch its electric range. Porsche says this system is three times more powerful than those the company uses in its other hybrids. The two electric motors decelerate the 918 up to 0.50 g versus 0.15 g in a Panamera hybrid. Naturally, the 918 Spyder also can be slowed with its carbon-ceramic brakes. 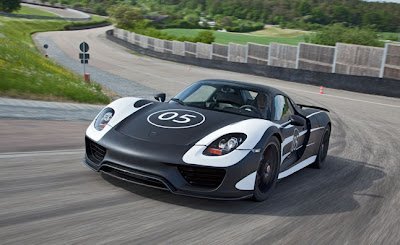 As in the Panamera hybrid, there’s no regeneration until the driver hits the brake pedal. Lifting off of the throttle only allows the car to coast, or, in Porsche parlance, to “sail.” The harder the driver pushes the brake pedal, though, the more electrical energy is generated. 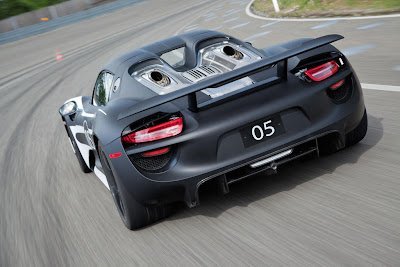 But we’re more interested in the right pedal. And when it’s kicked hard enough to fire the V-8, the 918 Spyder is transformed from an advanced tram into a serious race car. As a result of two special design features, the mid-mounted V-8’s voice has an extraordinarily aggressive timbre. “Our target is to emulate the sound we know from the Carrera GT’s V-10,” says Walliser. The exhaust manifolds sit between the two cylinder banks in a “hot-V” configuration, with collector pipes running over the top of the engine just behind the occupants’ heads. This reminds us of historic racers such as the 1965 Indy 500–winning Lotus-Ford with its high-mounted double-barrel exhaust.
The mule’s hot-V arrangement is a departure from the 918 concept’s, on which the exhaust outlets poked out the sides of the car just ahead of the rear wheels. For all its racy coolness, the new configuration—which the Germans call “heisse Seite innen,” or “hot on the inside”—is mainly here to keep the battery pack from overheating. This exhaust routing concentrates more heat between the cylinder banks, leaving the flanks and the bottom of the engine near the battery pack relatively cool.
Porsche developed the 4.6-liter, dry-sump V-8 engine exclusively for the 918 Spyder from the 3.4-liter V-8 that powered the company’s RS Spyder Le Mans prototype racer. Thanks to titanium connecting rods, plastic oil pumps, and a thin-walled crankcase, it’s extremely light. Porsche has eliminated belt drives by powering all accessories electrically.  Another departure from normal practice is the use of a flat, 180-degree crankshaft instead of the more common 90-degree design. What this sacrifices in smoothness, it more than makes up in high-rpm volumetric (breathing) efficiency. With a power peak of 9000 rpm, the 918’s engine certainly revs.