First broadcast of Doctor Who, 1963 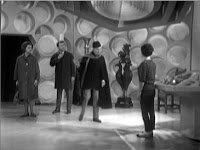 In December 1962, a Canadian-born science fiction fan called Sydney Newman took over as Head of Drama at BBC Television. The following March, he was given the task of filling an early evening slot in the Saturday schedule. His brief was to create a show that would appeal to children, teenagers and adults alike.

Earlier that year, the BBC Script Department’s Survey Group had produced a report, which suggested that a science fiction story involving time travel be developed. Newman seized on the idea, setting up brainstorming sessions with scriptwriters. During these sessions, Newman came up with the character of the Doctor and the idea of a vehicle that was larger on the inside than on the outside.

The relatively inexperienced Verity Lambert eventually took over control of production of the series, assisted by Mervyn Pinfield as associate producer, and David Whitaker as scriptwriter. Lambert offered the lead role to the 55-year-old character actor William Hartnell, who was initially reticent to take on the role. She also cast Carole Ann Ford as the Doctor’s granddaughter, Susan Foreman, and Jacqueline Hill and Ian Chesterton as two of Susan’s teachers.

Filming of the first Doctor Who story, “An Unearthly Child”, began at Lime Grove Studios on 27th September 1963, directed by Waris Hussein. Anthony Coburn’s script needed rewriting because it was scheduled to be the second storyline. Consequently, elements of the original opening story, “The Giants” written by C. E. Webber, were added. Coburn suggested that the Doctor’s ship, called the TARDIS, be disguised as a police box.

The show was filmed as if it were a play, offering little opportunity for retakes. As a result technical problems and performance errors necessitated that the first episode be filmed again. A number of changes were made to the story for the second shoot on 18th October, to make the Doctor’s character less forbidding and Susan’s character less strange.

The first episode aired at 5.15 pm on 23rd November 1963. It was watched by an estimated 4.4 million people, but failed to attract much attention (possibly because of coverage of the assassination of President Kennedy the previous day). As a result, the BBC decided to reshow the first episode directly before airing the second part the following week, attracting 5.9 million viewers, a figure that rose as the series continued, particularly with the introduction of the Daleks in the second series.