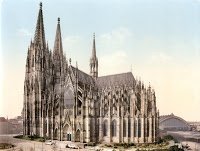 In 1164, Cologne’s Archbishop Rainald von Dassel brought the relics of the Magi to the city after the Holy Roman Emperor, Frederick Barbarossa, took them from Milan. These relics attracted pilgrims from across Europe to the city’s old Carolingian cathedral necessitating the construction of a new cathedral. On 15th August 1248, Archbishop Konrad von Hochstaden laid the first stone of the construction on the site of the old cathedral.

In 1322, the eastern arm was completed and consecrated. In order that the building could be used, a temporary wall was built while work continued on the rest of the structure. A lack of funds halted this work in 1473, leaving the southern tower incomplete with a huge crane on its top, which became a landmark of the city for the next four centuries.

Intermittent work continued on the nave, but this also ceased during the sixteenth century. In 1794, soldiers of revolutionary France occupied Cologne forcing the archbishop and cathedral chapter to flee. The building became a warehouse for some time, before its reconsecration in 1801.

Finally, in 1842, work recommenced to complete the cathedral after sufficient funds were raised. The Prussian treasury provided half of the money and the Zentral Dombau Verein (‘Central Association for Building the Cathedral’) raised the remainder. The builders applied modern construction techniques, while adhering to the medieval design.

On 14th August 1880, the last stone was laid, 632 years after construction began. At 10am, the celebrations began when the Prussian flag was unfurled at the top of the north tower and the Imperial standard was raised at the south tower watched by Emperor Wilhelm I. For four years the cathedral was the world’s tallest construction, and it continues to present the largest façade of any church in the world.