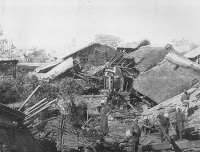 At just after half-past-six on the morning of 28th October 1891 an earthquake shook the provinces of Mino and Owari, on the Nōbi Plain, Japan, the effects of which were felt felt as far away as Tokyo and Osaka. Modern geologists believe that the epicentre of the earthquake was on the Neodani Fault-line in the Gifu Prefecture. They believe that the earthquake would have registered between magnitude 8.0 and 8.5 on the Richter Scale making it the most powerful quake to have an epicentre under the Japanese mainland, and one of the most powerful earthquakes in history.

The Gifu and Aichi prefectures bore the brunt of the quake, but the residents of Shiga and Fukui prefectures also suffered damage. The ground along the fault line tore apart resulting in vertical uplifts of up to 20ft (6m) in some places and the uprooting of trees on the mountains near the epicentre. The city of Gifu suffered a great deal of destruction made worse by the many fires that broke out after the quake; however, the older buildings made in the traditional way fared better than the modern structures built according to western methods.

Records show that the disaster caused 7,273 deaths and 17,175 casualties. The loss is marked on the 28th day of every month in a Buddhist memorial service at the Earthquake Memorial Hall. The Prefecture of Gifu marks the anniversary of the tragedy as “Prefectural Earthquake Disaster Prevention Day”, during which residents are helped to prepare for future quakes.

The Baxley Stamps web-site includes digital images of plates from The Great Earthquake of Japan, 1891 (circa 1892) by John Milne and W.K. Burton with Plates by K. Ogawa.