APPLY FOR THIS OPPORTUNITY! Or, know someone who would be a perfect fit? Let them know! Share / Like / Tag a friend in a post or comment! To complete application process efficiently and successfully, you must read the Application Instructions carefully before/during application process.
In January 1968, Alexander Dubček became First Secretary of the Communist Party of Czechoslovakia. Dubček was previously leader of the party in Slovakia, where he had implemented a programme of liberalisation. His application of the same reforms to the whole country resulted in criticism from hard-liners and the Soviet leadership in Moscow.

The leaders in Russia and other Warsaw Pact nations tried to persuade the Czechoslovak party to limit their reforms. These leaders met with Dubček at Čierna nad Tisou, near the Slovak-Russian border, where he assured them that while he remained allied to the Russia and other Eastern Bloc nations, the reforms he implemented where an internal matter. Unimpressed, the Soviets returned to Russia and hatched a plan to bring the reforms to an end.

On 21st August 1968, 200,000 Warsaw Pact troops armed with 200 tanks swept across Czechoslovakia and took control in Prague. The troops, who crossed the border a little before midnight on the day before, included regiments from USSR, Bulgaria, Hungary and Poland. Dubček urged the Czechoslovak people not to resist the invasion; yet, 72 were killed and around 700 injured during the invasion. 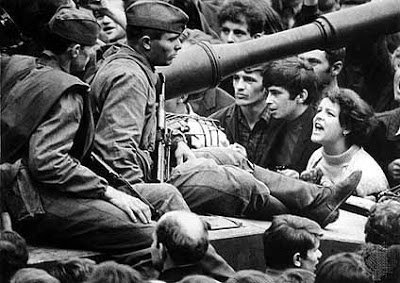 Having secured the airport in Prague, and confined the Czechoslovak armed forced to barracks, the invading forces captured Dubček and other reformers and put them on a plane to Moscow. While there, all but one of the Czechoslovak reformers were impelled to accept and sign the Moscow protocols, effectively ending the liberalisation programme despite the non-violent protests in support of reform back in Czechoslovakia. The Soviets allowed most of the reformers to return home on 27th August, but Dubček’s days were numbered: he was forced to resign his position in April 1969.

The Prague Life website includes more details about the reform programme known as the Prague Spring.